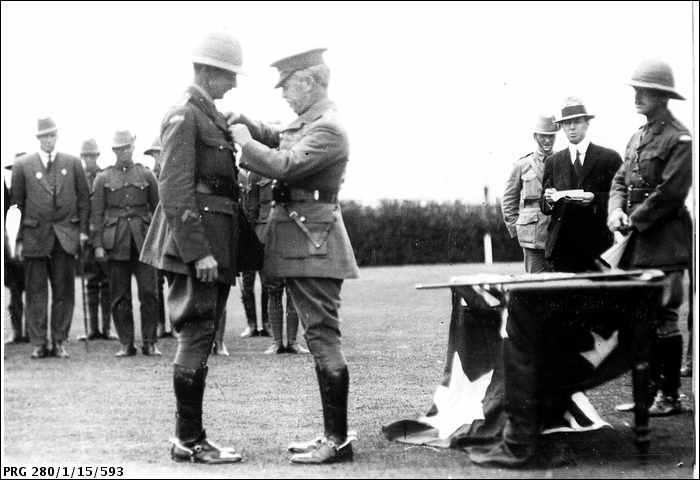 Lieutenant Colonel Stanley Price Weir, Commanding Officer of the 10th Battalion from 1914-September 1916, receiving his DSO from Governor Galway in 1919

September 1916 was a politically charged month. The conscription referendum was scheduled for 28 October, but campaigning was certainly well underway in September. On the battlefronts, it was a quieter month for our soldier correspondents, although many Australians were still on the frontlines.

September 1916 was also the month when the 10th Battalion farewelled their commanding officer, Lieutenant Colonel Stanley Price Weir, whose continuing ill health required him to be invalided to England. The Battalion diary gives us a good sense of what the routine of the soldiers was: during the first part of the month they were training and resting near Poperinghe, in Belgium. During the month, Arthur Blackburn’s Victoria Cross was announced for his actions at Pozieres and other Battalion members were recognised with Military Medals. On a sadder note, the diary also records an accident during bomb training, which killed two and injured a further 19. Later in the month, the Battalion had moved into reserve positions behind the lines and by month’s end they were again in the battle lines.

Leo Terrell’s unit were located in a similar area, near Ypres in Belgium and his diary records how the transition from summer to autumn brought rains, which made the ground terribly muddy.

Lou Avery was still in England and his diary records the first Zeppelin to be shot down during a raid. Leefe Robertson, the pilot who achieved this was awarded a Victoria Cross. Lou’s diary also tells us about his relationship with his landlady, who locked Lou and his mates out of the house, accusing them of ‘going out with dirty girls and called us a lot of cannibals.’ It seemed they managed to make peace and Lou completed his course.

Ethel Cooper managed to keep her spirits up in Germany, despite the desperate food shortages. Letters to her sister, Emmie, in Adelaide, could not be sent at the time, but Ethel wrote every week, and kept the letters hidden. A police raid during September clearly rattled her, but the letters were not found, and she continued to share the details of her life.

The anti-German sentiment in South Australia continued to fester, with members of the All-British League presenting a petition of almost 50,000 signatures calling for the closure of German schools, the removal of Germans from public office and the disenfranchisement of naturalised German subjects. It was also proposed that a number of South Australian placenames with German connections should be changed.

Fundraising for the war continued, with calls for donations for boxes to send to troops. With winter approaching in Europe, the requirement for socks was again top of mind – during one week, 217 pairs were donated.

In other news, infectious diseases were still a significant risk to public health, with both measles and meningitis outbreaks reported. There was also a story about the pressures on the Parkside Lunatic Asylum, with its director arguing that shell-shocked solders, patients under 18 and those with senile dementia should not be housed together. The plight of soldiers returning with shell-shock is also the subject of Alexandrine Seager’s poem, Back.

The South Australian Cricket Association announced that there would be no games scheduled for the coming summer, although horseracing did return to Morphettville. The Advertiser also reported that an expedition into Central Australia was planned by researchers from the South Australian Museum.

We can perhaps imagine the anguish with which South Australian Premier Crawford Vaughan came to the decisions to support the YES vote in the conscription campaign. A man of the left, he had always opposed conscription, but he pledged his support for the Prime Minister, proclaiming that ‘the question was not whether our ideals shall survive, but whether our national existence shall be preserved.’ With fierce campaigning already under way, the stage was set for the October referendum.