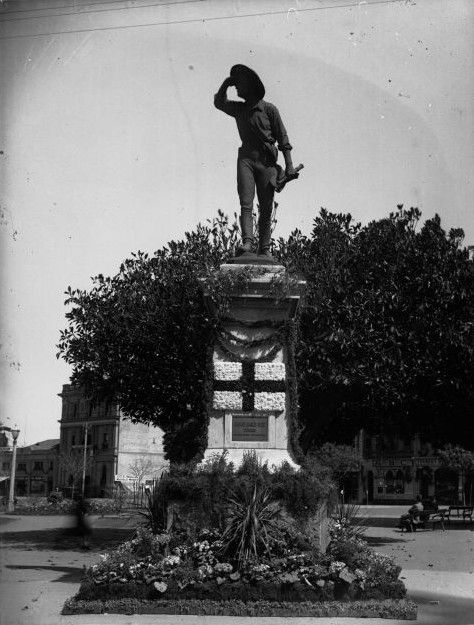 For the troops in Europe, Christmas was a miserable affair. Away from home, many endured the bitterly cold, wet conditions in or near the frontlines as fighting on the Somme continued, although the offensive was officially ended by General Haig in November.

All of our soldier correspondents noted the miserable conditions. The official diary of the 10th Battalion notes that they began the month in Dernancourt, on the Somme, moving later to Flers. More soldiers, it notes, were evacuated from exposure during December than from injury from enemy fire. The Commanding Officer mentions the high level of appreciation for the provision of tea by the Australian Comforts Fund volunteers ‘very close to the frontline’ and the fact that ‘Primus Stoves’ and ‘Tommy Cookers’ improved the situation by ensuring that men could have one hot meal and three hot drinks in a 24 hour period. The 10th served in the frontline trenches from 9-19 December, when they were relieved by the 9th Battalion. They spend Christmas Day working in camp, building huts, having distributed parcels on Christmas Eve.

Lou Avery managed to keep his cheerful attitude, although he was also suffering in the weather. The thick, deep mud prompted his to observe: ‘Am thinking of growing feathers and web feet. Quack quack.’ Lou attempted a shave for Christmas, but noted that it really just consisted of ‘scraping the mud and dirt off one’s face’. He and his mates had saved up ‘all the good things’ from their parcels for a celebration on Christmas Eve.

Leo Terrell was also in ‘a corner of hell’: the Somme district. Still working in communications, he was kept busy most of the month laying cables (and relaying them, when they were damaged by enemy fire). He spent a miserable day on his birthday (27 December) but news on the 28th that he was to go on leave seemed to cheer him. We leave him on 31 December in Le Havre, making his way to London.

James Churchill-Smith was also granted leave in London, and his diary recounts 10 days of theatre, dinner and other social commitments. He returned to the 50th Battalion on 19 December noting that the fatigues and parade that day were ‘awful after London’. However, his Christmas dinner seemed a jolly affair.

Ross Smith’s letters to his mother tell quite a different story. Ross was an airman serving in the Middle East, and his experiences were quite different to those of the infantry troops in France. In late 1916, the Australian Light Horse took part in major operations at El Arish, Magdhaba and Rafa, forcing a Turkish collapse in those areas in December 1916. As the Turkish forces retreated, Ross had an unusual experience: in a letter to his mother he wondered whether a town had ever before surrendered to an aeroplane! In the same letter, he tells his mother about the messages that the engineers have been writing on the bombs they are dropping from the planes. If they failed to detonate, those below would have been able to read messages such as ‘Carlton Ale’ and ‘A Present for Fritz and Johnny’ painted on them.

Ethel Cooper’s letters reveal that energy rationing was continuing in Germany during the cold winter months, and was seriously impacting on everyday life. Rationing also made for unusual Christmas gifts! Soap, mustard, jam and dried mushrooms were all on the list. She also noted the German peace proposal, which was dismissed as a public relations exercise rather than a serious attempt at ending the war.

MEANWHILE AT HOME IN SOUTH AUSTRALIA

The December editions of the Advertiser contained the usual array of articles about fundraising activities, farewell events for departing soldiers and nurses, casualty lists and overseas war news. Repatriation Day – held to raise funds for returning soldiers – was celebrated on 15 December. However, the newspaper also carried a story about the slow uptake of irrigation blocks at Pompoota (near Mypolonga on the Murray) by returned soldiers. This was going to be a tough transition for those returning home.

Captain Arthur Blackburn, who had been awarded a Victoria Cross by the King in London, was ‘entertained at a luncheon by the Ministry at Parliament’. In a lengthy interview with the Advertiser, he spoke about his wartime experiences, including a comparison between fighting in Gallipoli and France. He was later discharged from the military on medical grounds, but he continued to assist with recruiting. New targets for each state were calculated, and South Australia’s quota was 1300 new recruits each month.

Another celebrity of the time, Adela Pankhurst, was also in Adelaide in December. She spoke at the Australian Workers Union, urging the Allies to strive for peace. No doubt it was speeches such as this which inspired Alexandrine Seager’s deeply patriotic poem suggesting that there ‘is no Peace that we can find/Till victory!’

Whilst a number of building and infrastructure projects continued (including the unveiling of a statue of Captain Charles Sturt and the removal of the Police Barracks from behind the Museum to near to the Adelaide Gaol) some projects slowed or were halted by material shortages.

As 1916 drew to a close, no doubt many South Australians did not dare to even dream of peace, but quietly joined with James Churchill-Smith, hoping to be ‘home for the next new Year’.