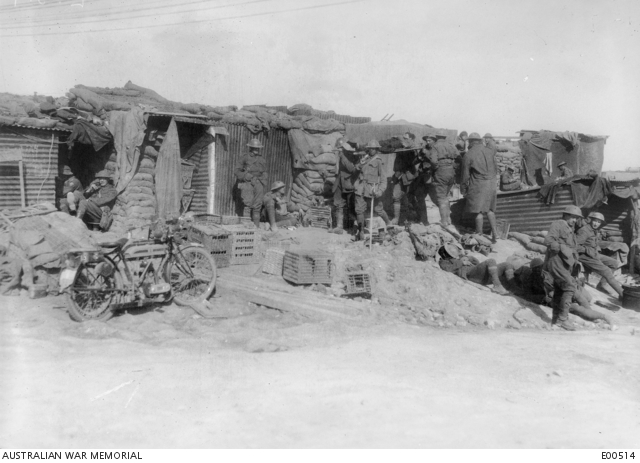 After the horrors of April in Europe, South Australians in the AIF as well as those at home braced for May.

After a bitter and divisive election campaign, the Australian public went to the polls on 5 May, the first electoral test for Prime Minister Billy Hughes and the Nationalists following the conscription referendum in October 1916, which had split the Labor party. Hughes had fought the campaign on the single issue of winning the war, and the Australian people demonstrated their still-strong conviction that support for the Motherland and  victory in Europe were of the highest priority

THE WAR IN EUROPE

Meanwhile in Europe, after a disastrous April, Allied forces were continuing their offensive for Arras. Australians were involved in the Second Bullecourt offensive on 3 May. As the 5th Brigade attacked, they were mown down The 6th Brigade, to their left, fared a little better, but casualties – killed, wounded and missing – were still phenomenally high, at 53%. But they had captured and held a small section of the Hindenburg Line. The battles of offensive attack and counterattack continued until 15 May, when the Germans abandoned the now-destroyed village of Bullecourt.

Combined with First Bullecourt in April, the Australians suffered around 10,000 casualties – a very heavy toll. We can only imagine what it must have been like back home in Australia as the telegrams arrived home with such devastating news.

Our individual correspondents weren’t directly involved in these battles, but they certainly heard news about them. Leo Terrell wasn’t far away, and he diary recalls the events: ‘Heavy bombardment started early last night and seemed something hellish judging by the Gun fire which could be heard quite plainly from Bapaume, The infantry went across in 6 waves, and judging by the number of wounded passing to C.C.S [casualty clearing station] we had heavy casualties but for all that we gained our objective.’ The 10th Battalion spent four days in the frontline trenches and suffered significant losses: the records record casualties as 7 officers, 174 other ranks. The diary entry this month includes some excerpts from the orders received by Battalion command.

From mid-May onwards, I ANZAC Corps were given a period of rest.

James Churchill-Smith was on leave in London for around a week, enjoying theatre and dinner engagements: ‘Dinner & Theatre with Mona at night… can’t say this holiday is ‘Cheep’ but for all that it is very enjoyable.’

Lou Avery’s diary records that he was again inoculated, and suffered the ill-effects. Later in the month, and billeted in a barn near Amiens, the enemy he and his mates were most focussed on later in the month were the rats sharing their accommodation. He was also informed that the recommendation his commission in the Engineers had gone through.

Ross Smith spent most of May 1917 in a tactical training course at the School of Military Aeronautics, and passed all his exams. Later in the month he completed 200 hours in the air as an observer, and began learning to fly dual control on a Maurice Farman aircraft.

Poor Ethel Cooper was by this time desperate to get out of Germany, but her pass was again refused. In her letters to her sister in Adelaide, she also noted that she had to give up all her aluminium kitchen things, as aluminium had been called in to help the war effort.

A glance through the Advertiser for May 1917 reveals that life continued in much the same vein as previous months. Of course the election and its results were reported, alongside the war news. There was also an air of expectation as American troops were mobilised.

Closer to home, Lady Galway – the wife of the Governor – was confined to her room after ‘slightly straining her heart’. And ominously a mouse plaque was spreading across the country, threatening wheat supplies. The papers continued to report casualties and also enlistments. There were also reports relating to the closure of German schools, which was to take place at the end of the financial year.

Despite the upbeat reporting of the situation in the press, there is no doubt that a sense of war weariness had set in as South Australians prepared for winter at home.