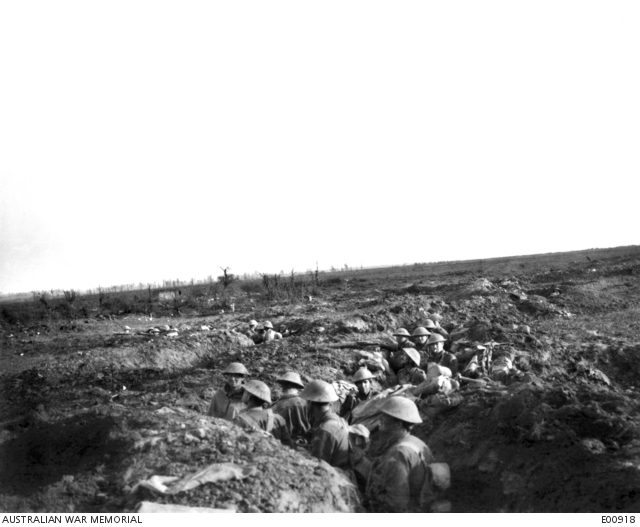 Broodseinde Ridge was seized by the 1st, 2nd and 3rd Australian, and 7th British Division on 4 October, that day's action being known as the 'Battle of Broodseinde'. The New Zealand Division simultaneously seized the `Abraham Heights' to the north west. The photograph was taken on 5 October and shows the 24th Battalion in trenches near `Flinte Farm' beyond the crest of the ridge looking down on the woods (in the middle distance) to which the Germans had been driven. Celtic Copse can be seen in the background.

After several months of status quo, when war weariness was evident throughout the state, a number of events – both at home and on the battlefronts took place in October 1917: a bill passed parliament, changing all German place names; in the Middle East, the decisive battle at Beersheba took place, and in Europe, as the Third Battle of Ypres continued, South Australians in both I and II Anzac Corps were involved in the fighting.

The next offensive in the Allies campaign took place at Broodseinde, and like Menin Road and Polygon Wood before it, was considered a success. But successive attacks on Passendaele were driven back, and a disastrous raid by the 10th Battalion on Celtic Wood cost numerous lives. (Until recent research by Bob Kearney and Chris Henschke, it was believed that 71 of the 85 who undertook this mission were lost – many without trace). The British General Haig was determined to take the village of Passendaele, but acknowledging that the Australians needed rest, finishing this grim task fell to fresher Canadian troops, with Australians in supporting roles.

As Lou Avery noted in his diary, ‘Rain had turned the country into a huge swamp again.’ It is almost impossible to imagine what it must have been like going into battle in this quagmire. His diary also reveals the toll that the war had taken on his mental health: ‘It is a battle between a frail body wanting to hide or run & the mastery of a determined brain which drives you on.’ He also reflected on the leadership qualities required by officers in the military, as his own promotion was confirmed. Towards the end of the month, he was awarded a Military Medal – ‘This was a great though pleasant shock & was so unexpected.’

At the end of last month, James Churchill-Smith was wounded – seven shrapnel fragments were identified in his head. He spent most of the month recovering in hospital, but seemed to have been on good spirits, and very appreciative of the care he received. It was not until the end of the month that he was ready to rejoin his battalion.

Leo Terrell was also battling Germans and the wet weather, but he was also involved in a more personal battle. Followers of this blog from the beginning of the war may remember that Leo begin his service with the navy, and was transferred to the AIF. His diary this month notes that ‘the military authorities have at last recognised their mistake about admitting me to the AIF with Naval papers. He was determined not to sign the new papers.

Ross Smith, in the Middle East, spent the early part of the month in the usual aircraft activities – photos and escorts. Later in the month he went by train to Cairo with two colleagues to collect three new aircraft. At the end of the month he was in the air, flying above the early stages of the attack on the heavily fortified Beersheba, 43 km from Gaza. By the late afternoon, when progress had stagnated, the 4th Light Horse Brigadewere ordered to attack, and on horseback, with bayonets, they attacked the Turkish trenches. This victory set the stage for the fall of Gaza in early November.

Ethel Cooper found out that again her pass to leave Germany had been denied. ‘What does the Foreign Office know – or think it knows – about me?’, she wondered in a letter to her sister Emmie in Adelaide. Despite the ravages and rations of war, she notes, though, that she is still a regular at the theatre three or four times a week.

Sometimes, when reading the newspaper articles, it is easy to imagine that the stories could just as easily be part of the newspaper today. On other occasions, the difference of century is stark. The analysis of the changing of German-derived place names clearly fits into the latter category. The committee tasked with recommending alternative names to the German-derived place names suggested many Aboriginal names as replacements. The Advertiser’s editorial on this subject – which agrees with the Government’s conclusion that there are too many Aboriginal names on the list – speaks of Aboriginal cultures and history in terms that are totally unacceptable today.

The Bill to change the names was passed in October, and assented to in early November, and our maps were changed.

In other news, the new East-West rail line opened, and the first passengers crossed the country, and the first female lawyer was admitted to the South Australian bar. Also on the topic of women’s employment, there was a call for a basic wage for women in factories, claiming that their existing rate ‘was an invitation to immorality’.

And of course there were the now familiar casualty lists – the number of dead and wounded continuing to grow. Fundraising continued and so too did the need for more recruits. 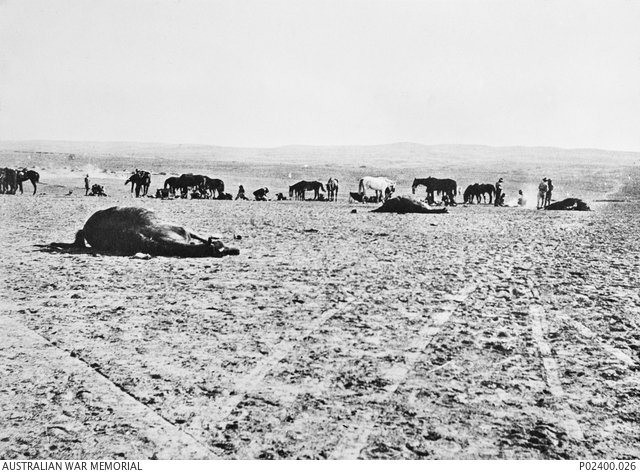 BEERSHEBA: A major city in the Negev desert in southern Israel, Beersheba was occupied during World War I by the Turkish army, which built a rail line from Gaza during 1915. The train system was in active service until 1917, when the British forces, along with Australian and New Zealand soldiers, forced the Turks out of the region. The Beersheba battle on October 31, 1917, was considered an important one in the overall campaign in the Sinai Desert and Palestine. Around 500 Australian Light Horse soldiers, carrying only bayonets, charged at the Turkish trenches and captured them. The action was seen as the final success of a cavalry charge in the history of the British military. Following the war, a Commonwealth War Graves Commission cemetery was constructed, containing dead from Britain, Australia and New Zealand, as well as a memorial park. The British reconstructed the railway, although continuing tensions regarding ownership rights on Palestinian land led to many Jewish residents leaving the city by the end of the 1930s.