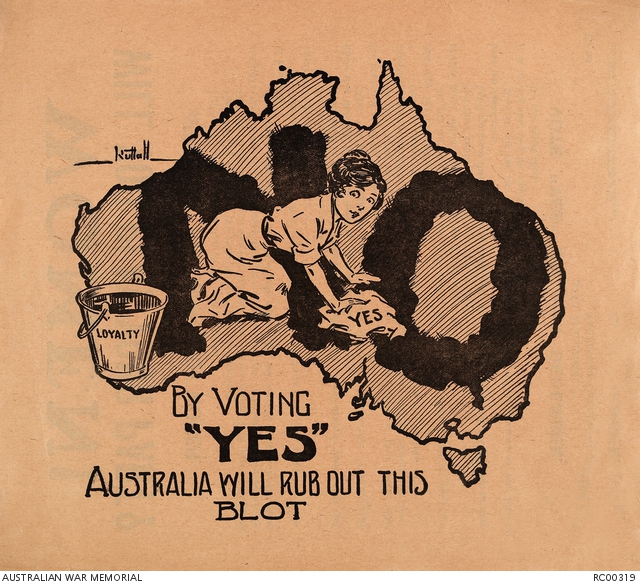 By voting 'Yes' Australia will rub out this blot

On November 11, we will remember the Armistice 99 years ago, which signalled the end of the First World War. Of course from 1917, South Australians had no idea how much longer the war would continue.

On the battle front, Australians were involved in campaigns in Europe and of course the Middle East, where the battle in Palestine continued to rage after the Light Horse charge on Beersheba on 31 October. From the air, Ross Smith played a significant role in this campaign, as he – along with his fellow airmen – took photographs above the battle lines, which were critical in shaping the plan of attack. The skies were dangerous, as German planes were also in the air, and Ross’s diary records several spectacular close calls. In one incident, his engine gave out, as he was under attack from both the air and the land. He was able to land safely, but when he took his plane out again to test the engine, he was not so lucky – tangled in telegraph lines, his plane was ruined and he suffered an injury to his leg which kept him grounded for a short period of time.

In Europe, the battle for Passchendaele (as part of Third Ypres) continued with several more offensives, but these did not involve any of our correspondents. It is worth noting that in the 8 weeks of this offensive the AIF suffered 38,000 casualties – 12,000 more than in 8 months at Gallipoli, yet the battlefields of Europe remain less well known in our national psyche.

For the most part, our soldier-correspondents were not much in the firing-line: the 10th Battalion were mostly drilling and training, whilst James Churchill-Smith rejoined his 50th Battlation following the injury he received in October. He was very disappointed that in his absence he had been overlooked for another promotion.

Lou Avery began the month in the frontlines, under attack from planes, bombs and guns. However, he believes that it was a gas attack which left him ill. He finished the month, though, feeling much happier with himself, at Royal Engineers Cadet School in England, where he appeared to be enjoying being measured for his new uniform, training, riding and being photographed.

Poor Ethel Cooper was still stuck in Germany, with no prospect of being allowed to leave. Her letters to her sister in Adelaide show that she and her Allied friends – other ex-pats in Germany – were still trying to keep their morale up, but the trains carrying soldiers from the Russian front in Germany’s east to the western front following the second Russian Revolution and Russia’s imminent withdrawal from the war were clearly not good news.

AT HOME IN SOUTH AUSTRALIA

At home, the routine remained the same. Fundraising continued (a new government ‘Liberty Loan’ was launched, offering 4% interest, tax free; there was a patriotic bulldog show and calls were made for more socks for the troops). More injured troops arrived home by boat, and ten soldiers and their families moved from the farming training camp at Pompoota to their new farms at Moorook.

The Advertiser reported the downside of good rains, too: rabbits, mice and grasshoppers – the latter in numbers so significant as to cause railway accidents, as trains were unable to maintain traction on tracks covered in grasshoppers.

Most notably, though, Prime Minister Billy Hughes announced that on December 20, Australians would again be called upon to vote in a referendum about conscription. Immediately another bitter and divisive campaign began. Enlistment numbers had remained low – only 2761 in October, despite estimates that 140,000 single and 280,000 married men were eligible to join.

We’ll leave the final word this month with Leo Terrell, whose diary records on 30 November: ‘The end of another month and not far off the end of another year. I am afraid there will be no end to the war this year.’