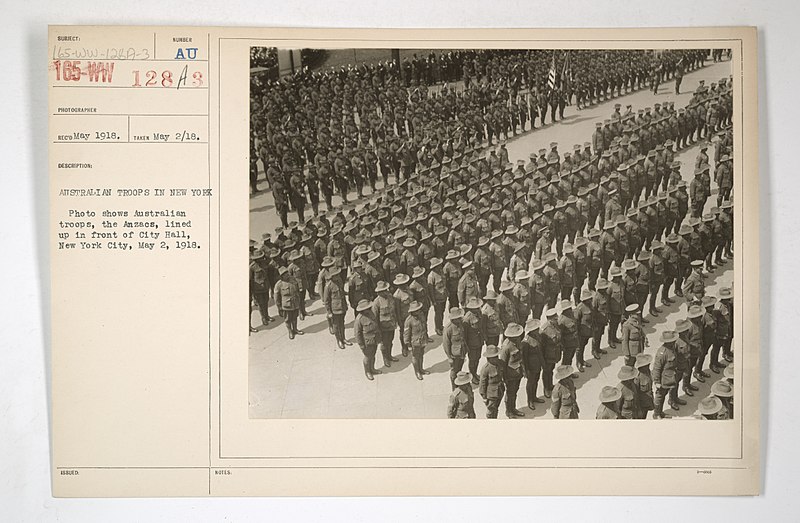 On 6 May, 1918, 500 Anzacs were greeted with ‘tremendous cheering’ as marched along Broadway in New York. They were there to aid the wartime fundraising American Liberty Loan campaign.

Sadly for our correspondents, they were not amongst the group. As the weather warmed up in Europe, they were instead occupied with the same activities of the last few months – doing their best to repulse German offensives on the western front.

Prime Minister Billy Hughes was also in the US, but received a cooler response from the President than the troops received from the public.

The 10th Battalion diary tells us that they spent May in northern France, cycling in and out of the front lines. They had a rest period out of the front lines during the middle of the month, but were still training and drilling every day. A Battalion sports day was held on 19 May, when running races were held along with three-legged races, sack races, wheelbarrow races and a fancy dress competition. The diary also notes that the whole battalion received ‘a change of underclothing’ on 15 May. The month ended with an offensive campaign which is recorded in the diary: ‘At 11.30pm our artillery opened ‘hurricane bombardment’, many shells falling short and I regret to state 2 officers and 20 other ranks casualties are attributed to this…’

James Churchill-Smith had a quieter month, which included the third anniversary of his enlistment and the beginning of his training at Mitcham Camp. He was enjoying the warmer weather and the Brigade swimming sports it allowed. He also ‘[h]ad a short ride in a tank – really enjoyable.’

It was a far more memorable month for Leo Terrell, who had been a reluctant recruit and an unhappy soldier since his enlistment. His diary records that he began the month with a narrow escape, spending an uncomfortable night under fire in France. But within a week, he was on his way to London, where he continued his preparations for his return to Australia – finally his wish for a discharge was coming true.

Ethel Cooper, in Germany, had no similar luck – she had exhausted her options to get a pass out of Germany. The high point of her month seems to have been meeting a 19 year old tabby cat who could open (but inevitably failed to close) doors.

Early May 1918 was unusually warm and dry, and the newspapers indicated no relief in sight for farmers in need of rain.

The war effort continued unabated, although there was a definite weariness in the tone now. The Advertiser contained many stories relating to the fundraising and trench comforts work that continued to be done in Adelaide and beyond: socks and other woollens were still being knitted and sent to faraway lands.

As the war drew ever onwards, anti-German sentiment remained high: in May the British Woman’s Alliance visited Premier Archibald Peake calling for the disenfranchisement of all German voters. They were accompanied by Captain Arthur Blackburn, who had been awarded a Victoria Cross for his actions leading an attack at Pozieres in July 1916. He had been discharged on medical grounds in 1917 but continued the fight on the homefront. There were also calls for enemy internees to be employed on public works, such as road-making, but as the Minister of Defence pointed out, these were civilian and not military prisoners. No doubt those who initiated these called were spurred on by the reports in the paper of the poor conditions and ill-treatment of prisoners of war in German camps. But there was another group of citizens publicly vilified, with the Minister of Defence making a ‘strong call for unity for the stamping out of pacifism and disloyalty in the community.’

There was a spike in enlistments in May, 4888 up from 2781 the previous month, but these numbers were not enough to replace those who were killed and injured in spring offensives on the battlefield.