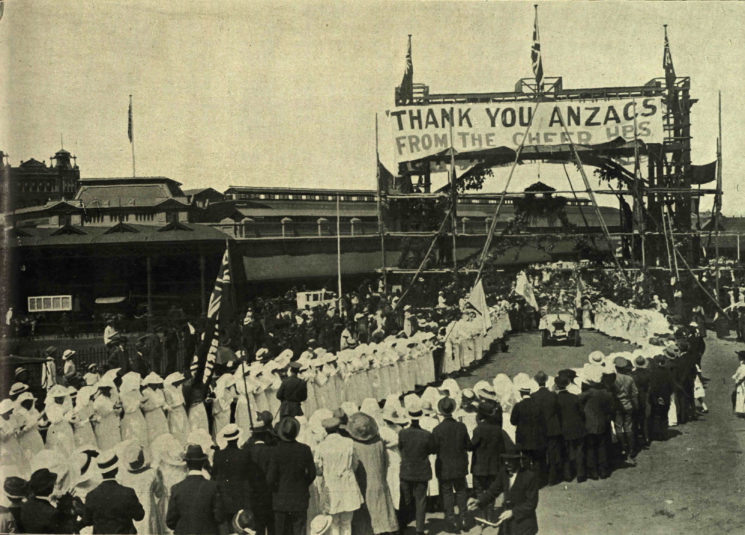 With hindsight, we know that the end of the war was only just around the corner when October 1918 rolled around, and soon the people of South Australia would be able to celebrate.

They knew it, as well – but just how close was anyone’s guess. The German armies were in retreat in Europe, and the battle in the Middle East was also drawing to a close. Ross Smith‘s letters home paint a picture of his role in the mopping up of the area around Aleppo. Indeed, in one letter he describes his actions to destroy a German plane, and capture the pilot and observer. These actions, he surmised, were the reason that he received the second bar on his DFC (Distinguished Flying Cross). He had been awarded the first bar only weeks earlier. (A bar is awarded when the person has already received the award. It is literally a bar that is worn on the ribbon of the medal).

In Europe, the fighting continued, although the progress was good. James Churchill-Smith‘s diary reveals plenty of time for tennis, bridge and football. He celebrated his 24th birthday during the month, and noted that he was ‘getting very fat and have had to get my tunic let out – and this is war!!!’ Towards the end of the month, though, things were a bit more serious, as he was involved in the planning of a battalion attack.

The 10th Battalion diary was very brief for the month – bathing and training seemed to be the primary occupations of the men for the month.

Ethel Cooper, still living in Germany, also had wind of the impending peace. Of course, the mood in Leipzig is very different to that in South Australia. Whilst she may be ‘walking on air’ the mood in Germany was sombre. She does mention the Spanish ‘flu (she calls it the grippe) and its deadly consequences. She also writes about her fears that Germany will fall to communism, but comments that ‘the rabbits are more likely to rise against the gamekeeper than this people against the authorities…’

At home again in South Australia, Leo Terrell was settling back into civilian life. He found a new job, enabling him to leave Port Pirie, and return to Clara. He also commenced vocational training, driving engines. Regular followers of this blog will know that Leo’s diary is not filled with sentiment, so it is not surprising that he reports his bother’s death with bluntness: ‘My brother died of Bronchial Pneumonia being 23 years old’. We can imagine, though, his sorrow at losing his brother so soon after his return home.

Elsewhere in South Australia, the progress towards peace filled the papers. News that Germany had accepted US President Woodrow Wilson’s 14 articles was a cause for optimism, but it was still unclear when the fighting would stop. As late as 30 October, there was an article suggesting ‘PEACE PROBABLE BEFORE CHRISTMAS’. Although the timing was uncertain, the outcome was not, and work was commenced on the ANZAC ARCH that was reported in the Advertiser as the first Anzac triumphal arch in Australia. It was to be 45 foot high and located adjacent the Adelaide Railway Station.

Other top stories included news of the spread of the Spanish ‘flu around the world, and also the welcome rains around the state in early October. There was also talk of a plan being hatched by ‘prominent business and financial men’ to establish an aerial mail service between Sydney and London, something totally unimaginable before the war.

Although peace was tantalisingly close, the guns were still in action in Europe, and the blood of young soldiers was still being spilled. Indeed, there were still people volunteering for service late in the month.

From our perspective today, those lives lost on the battlefield so close to peace seem especially tragic – but hardly more so than the thousands lost and shattered in the years since April 1915, when the AIF first joined the fray. The imminent peace was certainly a reason for celebration, but some shattered lives would never heal.