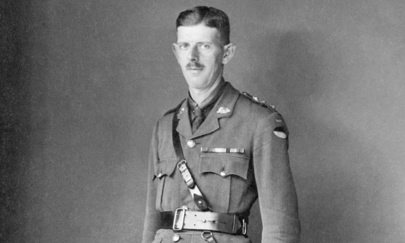 Arthur Blackburn, who was awarded a Victoria Cross at Pozieres.

Many Australians are familiar with the events at Gallipoli where, in April 1915, Australians and New Zealanders stormed the beach at Anzac Cove. Despite the odds, they clung to this piece of land for around 8 month before the objective was abandoned and the forces withdrawn. Indeed, it has been argued that our national identity was forged on that battleground. Far fewer Australians know about the actions on the battlefields of Europe, where many, many more Australian lives were lost. The first major battle for the Australians was on the Somme in July 1916, at Fromelles, and then a few days later at Pozieres.

The casualties from these two battles were horrendous. The official diary of the 10th Battalion  provides a detailed account of their role at Pozieres and makes compelling reading. (The July entry is reproduced in full in the link below.) It also recounts the actions of Lieutenant Arthur Blackburn, whose bravery on 23 July was recognised with a Victoria Cross. Colonel Price Weir, the Battalion Commanding Officer ends the entry with a summary of casualties: ‘KILLED 2 officers 56 OR [other ranks]; WOUNDED 11 officers, 235 OR; MISSING 46 OR.

Leo Terrell’s diary recalls the post-battle carnage at Fromelles: ‘This morning found the 8th Brigade back in the same spot as when they left, and many men short. No Man’s Land was a terrible sight: dead and dying everywhere.’ Three days later, back behind the lines, he had his first bath since arriving in France some 27 days earlier. As the month closed, Terrell was on the sick list, with septic sores on his hands brought about, he thinks, by a lack of vegetables.

James Churchill-Smith, in the 50th Battalion, was spared the bloodbath on the Somme for now, instead spending the first part of the month training at a Senior Officers School. He seemed to enjoy the experience, despite an injury (‘strained my right testicule (sic) at bayonet fighting’).

We also welcome back Ross Smith of the 3rd Light Horse. Smith was still in the Middle East in July 1916 and we pick up his story from a letter to his mother about the prelude to the Battle of Romani, which took place in early August.

Our final soldier correspondent, Lou Avery, was in Britain in July, visiting family members in England and Scotland. As the month drew to a close, he was preparing to depart for France.

Meanwhile, at home in South Australia, outbreaks of meningitis and measles were causing concern and some wild weather left damage around Adelaide, including at Mitcham Army Camp. There were floods along the Torrens (a fairly regular occurrence) and a plan was proposed to divert the river through a new channel to Henley Beach.

The Advertiser reported that South Australia’s third female police constable had been appointed and there was a story about women being employed as boundary riders on a property in the Riverina.

With news from the war continuing to dominate the papers, it was noted that the Somme had replaced Verdun as the focal point on the Western front and when Australians were deployed here much was made of their contribution. Patriotic fundraising activities continued, as did the push for new recruits and the debates about whether Australia should introduce conscription. During the month only just over 6000 men enlisted, yet from the battles of Fromelles and Pozieres, there were more than 10,000 Australian casualties. At the very end of the month Prime Minister Billy Hughes returned to Australia, when the issue of maintaining the AIF at its existing capacity was critical.

Whilst things seemed tough in South Australia, Ethel Cooper’s letters from Leipzig to her sister in Adelaide continue to remind us that the situation for German citizens was far more difficult: food was becoming even more scarce, gold and jewels were being requisitioned by the Government, and even fabric for making clothes and household essentials was available only with a permit.

As July 1916 drew to a close, Ethel Cooper noted: ‘This is the last letter of the second year. It seems like an eternity.’ With hindsight, we know that it the war had not even reached its halfway point. 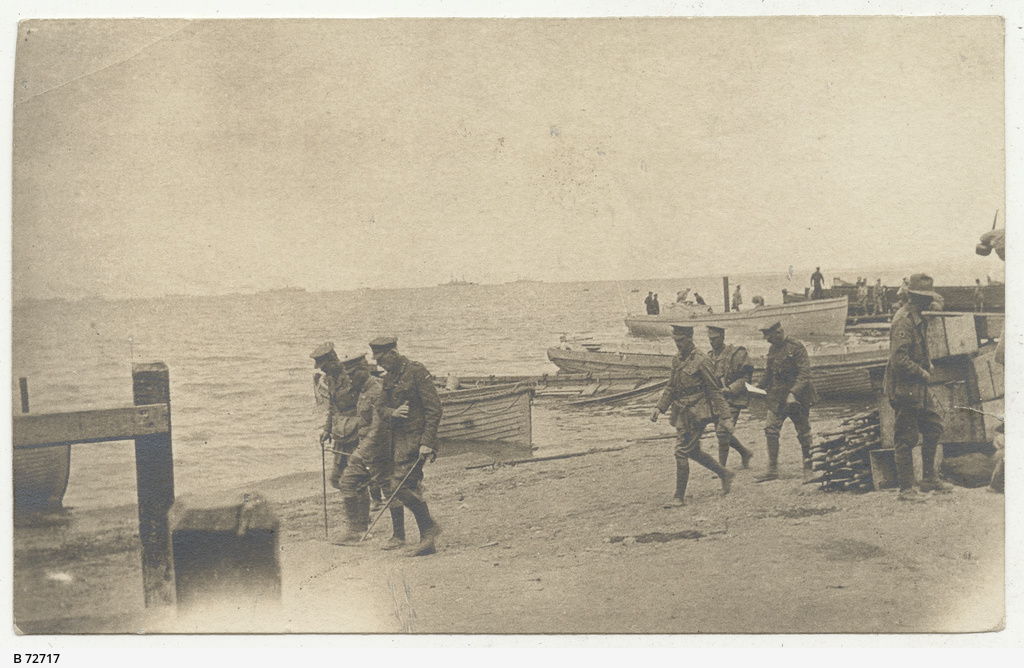 The Australian Landings at Gallipoli

The weather was calm off the coast of the Gallipoli Peninsula (now part of modern-day Turkey) on the night of 24-25 April. Some 40,000 Ottoman troops were on the peninsula, and another 30,000 were nearby. On that morning the men of the Australian 1st Division’s 3rd Brigade (the 9th, 10th, 11th and 12th Battalions) were the first to go ashore. Before dawn they left their transport ships, climbed into row boats and were towed towards the shore. At 4.29 am the first of the row boats landed on the shore, and almost immediately the Ottoman’s opened fire. The terrain that greeted them was a narrow beach where steep hills met the water, and the Ottoman forces fired down upon them from these hills. The order was for the troops to push forward towards the third ridge – the target for the first day. Within 15 minutes some had reached the top of the first ridge point. The second wave of Australian soldiers was now arriving onshore, and with the element of surprise now gone, they were met with heavy fire. Upon landing, they too began to fight their way up the hills towards their objective. At 5.30am, the commander of the 3rd Brigade, Sinclair-MacLagan made an assessment that the third ridge was too distant to capture immediately and decided to consolidate his troops on the second ridge. Casualties from the landing and the first day’s fighting were significant. It was difficult to set up casualty clearing stations that were protected from enemy fire and there was enormous pressure on stretcher bearers, who lacked adequate equipment and the suffering of the wounded was significant. About 2000 wounded were evacuated overnight on 25-26 April. Over the following days, the Ottomans launched a number of counter-attacks, but the Anzacs held their positions. On 1 May, four Battalions from the Royal Naval Division had come ashore as reinforcements, and the exhausted Anzacs were about to withdraw and regroup. Meanwhile, the Ottoman forces, under Mustafa Kemal (Ataturk) responded with reinforcements and repositioning of artillery. CEW Bean noted that South Australians Arthur Blackburn and Philip Robin probably penetrated further inland than anyone else on that day

View more content related to The Australian Landings at Gallipoli. 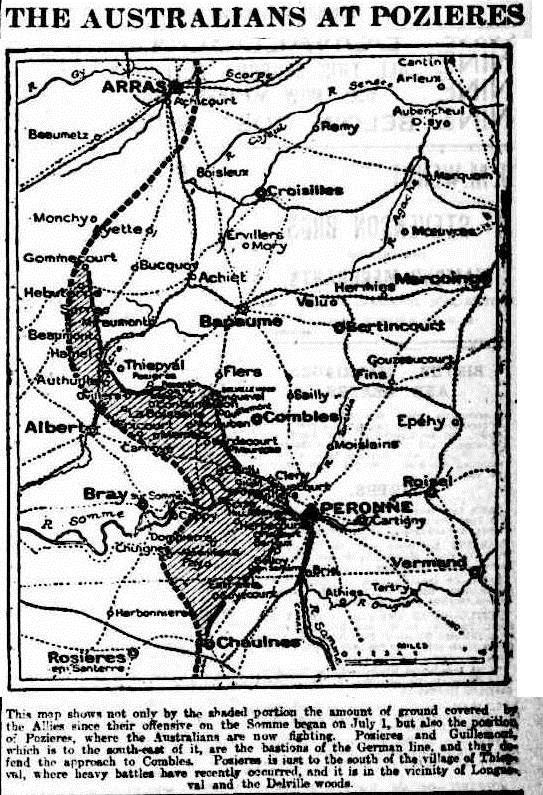 Britain’s General Haig didn’t execute any significant offenses in the first half of 1916 but by mid-year a joint offensive with the French was planned for the Somme region, north east of Amiens. The plan was to smash the opposition with heavy artillery fire, destroying the barbed wire in No Man’s Land and driving out the enemy troops from the frontline trenches in advance of an infantry attack. The bombardment began on 24 June, a week before the offensive commenced. Problems with British-manufactured the shells and the guns meant that the bombardment was less effective than planned and most of the German artillery survived. On 1 July, when the British attached they were slaughtered by the Germans machine guns: around 20,000 killed and 40,000 injured. The AIF joined the Battle on 19 July at Fromelles (Flerubaix). The Germans held the higher ground and so could see that an attack was imminent. Again, inferior weaponry and poor communication resulted in very high casualties of both British and Australian troops, and many were taken prisoner of war. In less than 24 hours the Australian 5th division suffered 5533 casualties. Within a few days more Australian troops went into battle at Pozieres. Again and impressive barrage preceded the attack and at 12.30am on 23 July, Australians, including the 10th Battalion began the assault. Although they succeeded in their objective of capturing Pozieres, German counter-offensives forced them back. In four days the Australian division had lost 5285. 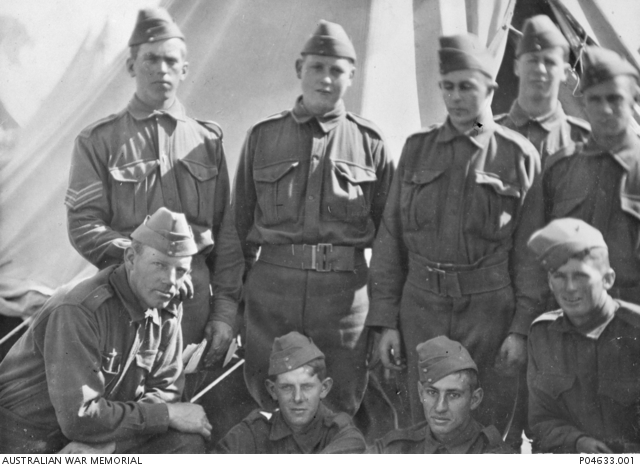 Blackburn was a fresh faced, 25 year old solicitor who entered the First World War as a private and ended his military career as a distinguished Commissioned Officer.  He was the first South Australian to receive a Victoria Cross for his bravery during the Battle of the Somme.  In this action he led 50 men in repeated attacks on enemy trenches in the French town of Pozieres.  He went on to fight in the Second World War, and was created a Commander of the Order of the British Empire and a Companion of the Order of Saint Michael and Saint George. 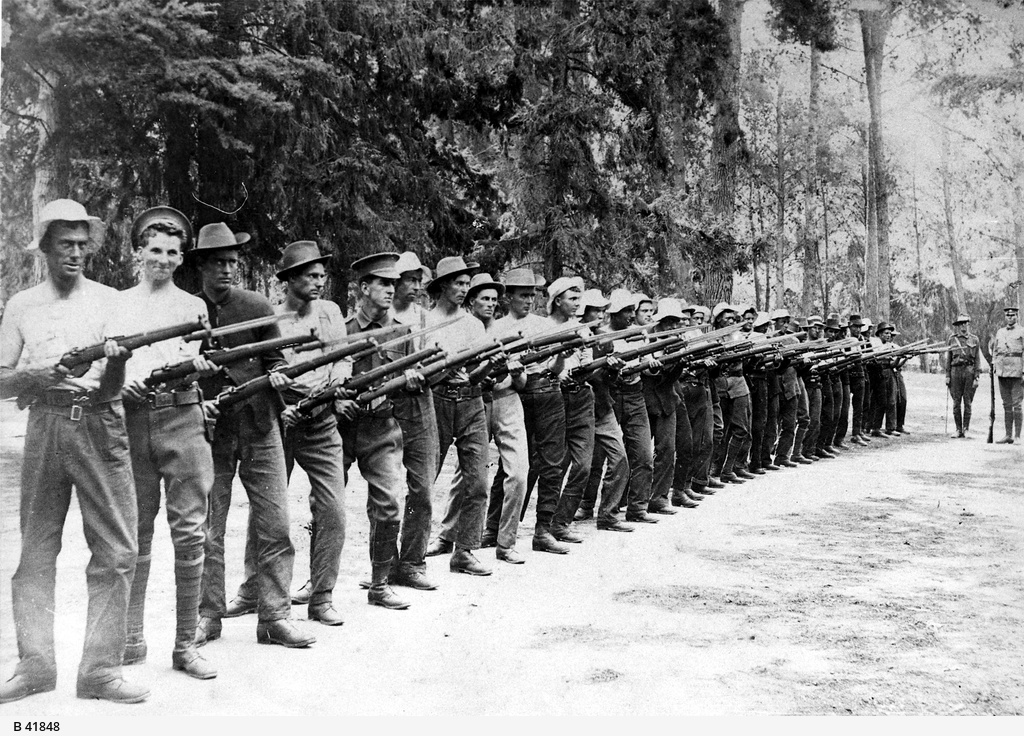 It was in April 1915 when a model garden suburb in the area was still on the drawing board, that the army established Mitcham Camp on the three hundred acre Grange Farm owned by the Mortlock family. When Australia first entered WW1, a flood of enthusiastic young men enlisted to “do their bit for their country” in a rush of nationalistic fervour. The Mitcham camp was established after the first camp at Morphettville became overcrowded. Troops from the 27th Battalion marched into Mitcham Camp on 1 April 1915 and the area was soon a sea of tents swarming with thousands of enthusiastic new enlistees. The camp accommodated over 4,000 soldiers training for up to 12 weeks. Field patrols, bayonet fighting, bomb throwing and trench digging were all part of routine training at the camp. The Light Horse camped and cared for their horses near what is now the eastern end of Prince George Parade. Camp headquarters were initially in the old four roomed Grange farmhouse. By 1916 Mitcham Camp resembled a large mining town with rows of neat galvanised iron huts, a hospital, camp HQ, a large recreation building run by the YMCA, a Post Office, bank agency, barbers, and religious facilities for many denominations. Sealed roads were named after Adelaide’s main city streets. Soldiers regularly marched up Wattlebury Road on training. When the troops assembled at Mitcham Station for embarkation from Outer Harbour, the local community gave them a rousing farewell. Some camp activities were not quite so popular with the locals though. On February 14, 1916 The Advertiser reported that residents from surrounding suburbs were startled by loud explosions as soldiers practised live bomb throwing under simulated war conditions. Local resident Ron Lugg recalled his excitement at passing the camp regularly as a boy, eagerly awaiting his 18th birthday when he could enlist. Many of the former students from the Brownhill Creek and Mitcham Primary schools who enlisted, trained at Mitcham Camp. By early 1918, training on home grounds ceased with troops dispatched for training in Egypt or England as soon as a ship became available. information from http://www.mitchamcouncil.sa.gov.au/mitchamarmycamp