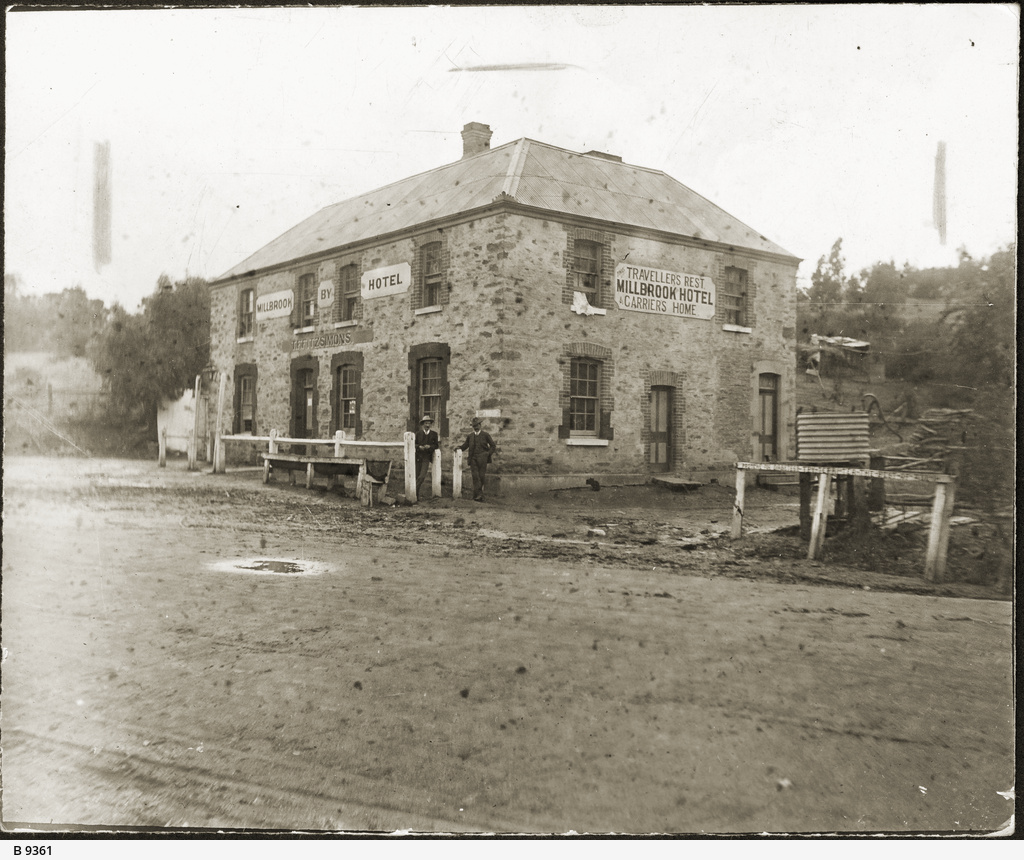 Milbrook Hotel - demolished and covered by the Millbrook Reservoir. In 1908 the proprietors were JF Fitzgerald and Albert William Seppelt. The reservoir was built from 1914 to 1918 during World War I to control water flows in the Upper River Torrens and to provide gravity fed water to Adelaide's eastern suburbs. Before its inundation the town of Millbrook was a thriving community situated on a creek of the same name. The majority of the inhabitants were gardeners, poultry farmers, woodcarvers. Gold, copper and lead were to be found in the area. B-9361 image courtesy State Library of South Australia.

An Imperial War Conference was held in London in early June. Australian Prime Minister Billy Hughes arrived late, following his trip to America. The mood that greeted him was not buoyant: The German spring offensives had continued to be successful, and (as James Churchill Smith noted in his diary), the Germans were in striking distance of Paris. As thousands fled the city in panic, the British even considered withdrawal from France. However, the American forces – numbering around 900,000 began to arrive in the months leading up to June (again, Churchill-Smith mentions in his diary meeting and showing American officers around). Morale amongst the German soldiers remained low, too, despite the successes. As we know from Ethel Cooper’s letters, every single man who could possibly fight had been conscripted, and that rationing had bitten deep into German civilian society.

The 10th Battalion spent the month in and out of the front lines in the Merris sector (in northern France). The stalemate continued.

It was clear that a new strategy was required – the mass infantry attacks that had been the hallmark of the war to this point were not going to bring victory. At the Conference, Hughes and Winston Churchill (who had returned to the government as Minister of Munitions) called to greater reliance on the new technologies of tanks and planes. (Ross Smith’s letters to his mother this month give further information about the various roles that aircraft played at this point of the war, although Smith was writing from the Middle East rather than from the Western Front.)

The conference also saw heated debate about the power and authority of dominion governments. Billy Hughes was not alone in calling for greater autonomy. Ultimately, though, little change was achieved in this critical wartime. It was, however, agreed that Germany should not be able to retain any colonies – New Guinea being the closest to Australia.

Of course, while overseas Hughes was speaking for Australia, but at home the population was much divided. The left of politics was beginning to advocate for a negotiated peace rather than victory: they had had enough of this war.

We know that Leo Terrell had also had enough of the war – he was finally on a ship on his way home, having been discharged. He doesn’t write much during the month, but we do get a sense of the dangerous nature of sea voyages at this time.

In late May John Monash was recommended as commander of the Australian Corps, the first native-born Australian to hold the role. Some ugly campaigning – Monash was of German and Jewish heritage – failed to stop the appointment, and in the interim Monash took control and began planning for its next major operation, Hamel, in early July.

In South Australia the Advertiser reported that Millbrook Reservoir (which had been under construction since 1914) was finally ready to store water for the metropolitan population.

In 1918 Violet Day was held on the shortest day of the year, 21 June, and continued to be a focus for fundraising for the Cheer up Hut. It was also reported in the paper that the Cross of Honour, distributed to the homes of those who had enlisted, was in high demand. A musical concert featuring a thousand-voice choir at the Exhibition Building was another fundraising activity

There seemed little to be optimistic about in June 1918. How could the tide be turned?